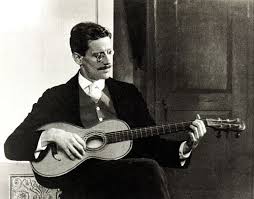 ‘The Dead’ is one of the most celebrated short stories in the English language. Set during and after a festive family gathering in Dublin in the early 1900s, the plot hinges on a chilling moment of truth, or epiphany, experienced by Gabriel Conroy about his relationship with his wife Gretta:

The air of the room chilled his shoulders. He stretched himself cautiously along under the sheets and lay down beside his wife. One by one, they were all becoming shades. Better pass boldly into that other world, in the full glory of some passion, than fade and wither dismally with age. He thought of how she who lay beside him had locked in her heart for so many years that image of her lover’s eyes when he had told her that he did not wish to live.’

‘Dubliners . . . contains one story, the longest story in the book and the last story which seemed to me perfection whilst I read it! I regretted that I was not the author of it.’ – George Moore, author of Esther Waters and ‘Albert Nobbs’

‘In its lyrical, melancholy acceptance of all that life and death offer, “The Dead” is a linchpin in Joyce’s work.’ – Richard Ellman, biographer of James Joyce

‘Joyce’s “The Dead” is one of the greatest short stories in the language.’ – Roger Ebert, reviewing John Huston’s film adaptation (1987)

‘As fate thankfully had it, Joyce added this story to the Dubliners manuscript as a sudden afterthought while his publishers prevaricated. The most powerful in the collection, “The Dead” is not about death. It’s about life force . . . The last three paragraphs are among the most beautiful ever written.’ – Alison MacLeod, Guardian

‘For all the ingenuity and wit of Ulysses and Finnegans Wake, the reputation of James Joyce as an artist may well rest on the sublime perfection of “The Dead” – Eileen Battersby, Irish Times

James Joyce (1882–1941) was born in Dublin but left Ireland in 1904 for a life of exile in Europe. Among his major works are Dubliners; A Portrait of the Artist as a Young Man; Ulysses; and Finnegans Wake.